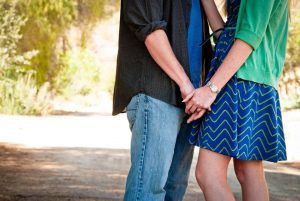 Are you thinking of popping the question and asking your significant other to marry? Miami is one of the best places to do so; its amazing sights provide a beautiful backdrop to dropping on one knee and making the moment memorable.

In honor of lovers on Valentine’s Day and any day, here are my picks for the best free or cheap places to propose.  (We are not pretentious at Miami On The Cheap and prefer that one saves money for the upcoming expenses, like the wedding celebration, honeymoon or home.)

However, for those who don’t mind spending on this memorable occasion, I’ve included a “splurge” item in some cases. But a better option might be to grab some delicious cheap Cuban food before or after the moment of engagement. See “Best cheap Cuban food.“

Finally, in the heat of the emotion, remember to take a selfie or video after to capture the joyous smiles! Or return with a professional photographer to take engagement photos of the happy couple in the place where it all began. YOLO.

Best places to pop the question (in random order):

1. South Pointe Park (1 Washington Ave., Miami Beach) on the southern edge of Miami Beach. I cannot get enough of the panoramic views of this southernmost point of Miami Beach, whether to watch the mega cruise ships head out to the ocean or to walk as far out as I can on the pier. How about doing both? Take a long slow stroll from where the view toward Fisher Island is and top it off at the edge of the pier at sunset for The Question. It’s all nicely paved for a romantic stroll. Open 7:30 am to sunset.

Splurge: Include a meal and/or drinks at nearby Smith & Wollensky. 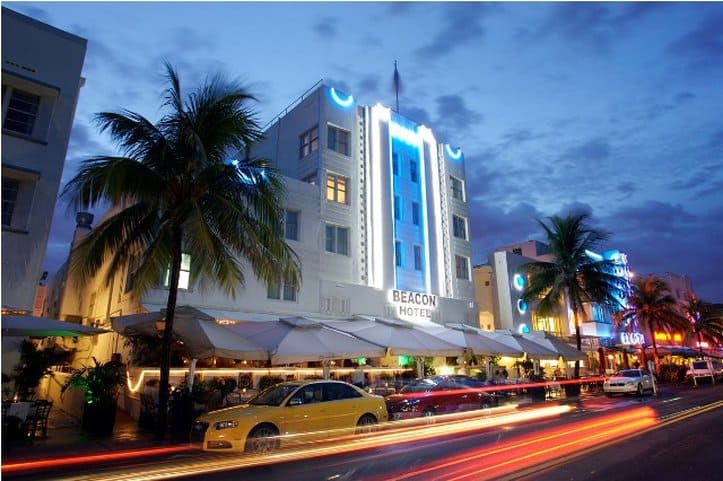 2. South Beach (Ocean Drive between 5th Street and 14th Place) Romance for many people means a barefoot stroll on the sunny beach holding hands and watching the ocean waves roll in. Anywhere on the beach next to the ocean, either facing the beautiful Art Deco hotels or the expanse of the ocean is a nice place to pop the question. Or even along Lummus Park which parallels the beach. However, if you prefer night time, I recommend staying closer to safety on the sidewalk of Ocean Drive with the neon lights of the Art Deco hotels as a backdrop. The South Beach energy is definitely sexy.

Cheap bonus: Top off the celebration with a capuccino, croissant or gelato from nearby Pinocchio Italian Deli & Caffe.

3. El Malecón de Brickell (Brickell Bay Drive between Southeast 15th Road and 14th Street) A malecón is Spanish for the equivalent of a seawall or promenade where people can stroll right next to the ocean. For an urban oasis, this site offers a beautiful view of skyscrapers facing the ocean. I have walked this during the day as well as at night and it’s lovely either way, but I think I prefer it under the moonlight for more romance.

Splurge: Include a meal and/or drinks at the water view restaurant, Crazy About You. 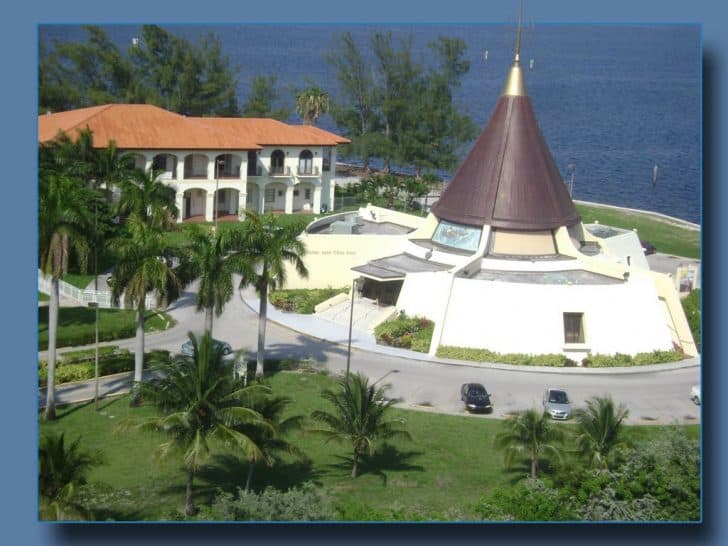 4. La Ermita de la Caridad (3609 S. Miami Ave., Miami) This is a Catholic shrine to Our Lady of Charity, the patroness of Cuba who is revered by many Cuban-Americans who exiled in Miami as refugees. Behind the round church is an ocean view “toward Cuba” and that’s where I suggest you pop the question. There is a seawall, along with benches and palm trees, and the place was recently fixed nicely. If you want to add some mindfulness to the occasion, go in to the church and pray or meditate. It has a lovely 747-square-foot mural with 63 prominent figures behind the altar. The most famous person to visit this church recently was President Barack Obama.

Cheap bonus: Have a Cuban cafecito at Los Tres Juanes kiosk next to the shrine. 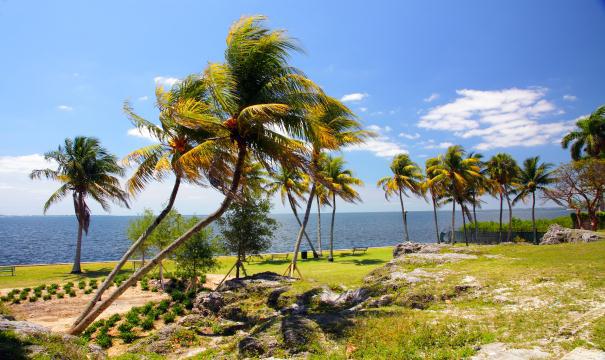 5. Alice C. Wainwright Park (2845 Brickell Ave., Miami) This hidden park has amazing water views and plenty of amenities but most folks forget it exists. Runners and cyclists usually meet here at sunrise before making long treks over the Rickenbacker Causeway or down toward Coconut Grove. It’s not a beach place, but it does offer barbecue grills, picnic shelters, playground and basketball court. If you really want to surprise your loved one, throw a surprise engagement celebration with hidden guests who come out from behind the trees at the appropriate moment. Just sayin’. This park opens from sunrise to sunset. 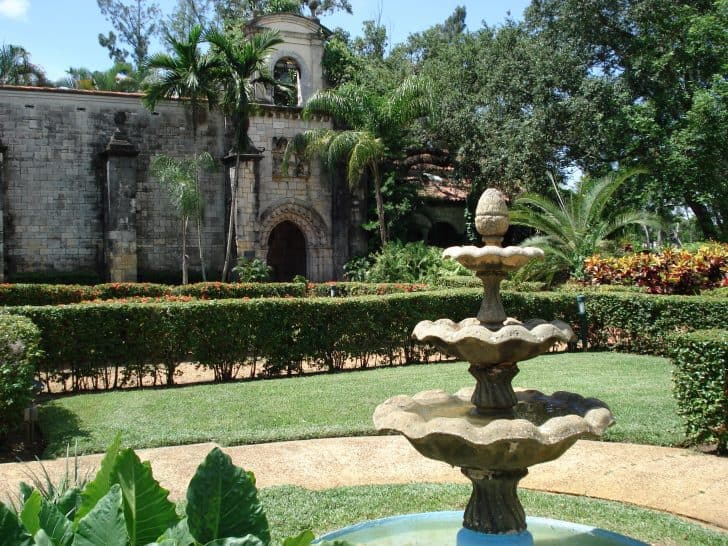 6. The Ancient Spanish Monastery (16711 Dixie Hwy, North Miami Beach.) Next to Bernard de Clairvaux Church, the Ancient Spanish Monastery, is a popular wedding venue and a great alternative to the pricey Vizcaya Museum & Gardens. The beautiful Romanesque architecture from the 1100s and outside gardens provide a wonderful and serene backdrop to show the ring and get down on one knee. I especially like the inside of the Cloisters and its roman arches for taking beautiful photos. The building is listed on the National Register of Historic Places as the Old Spanish Monastery. Tour the grounds, visit the inside of the church and pop the question when it is least expected for the delightful element of surprise.

Cheap bonus: Try the nearby Laurenzo’s Italian Center, a grocery with a bakery that includes delicious Italian pastries, like cannolis. The family has been in business for more than 59 years. 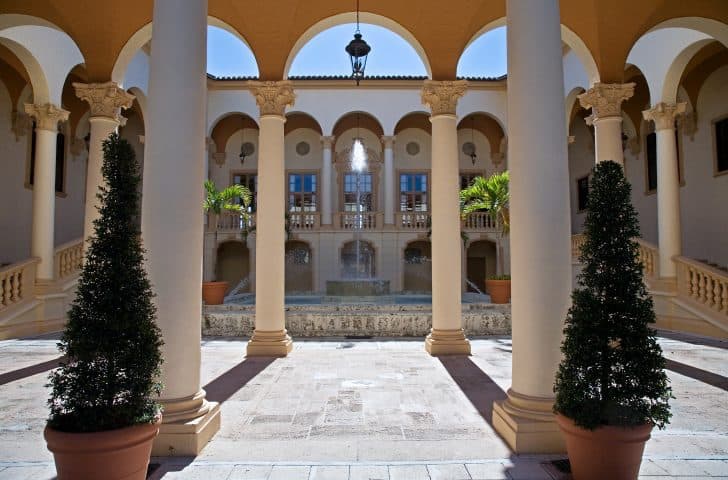 7. The outdoor fountain at The Biltmore hotel (1200 Anastasia Ave., Coral Gables). This hotel has several fountains, but I am specifically talking about the one outside the Country Club Ballroom, which is often photographed for magazines and weddings. The fountain was made from coral from the Atlantic Ocean and its surrounding arches add to the beauty. Here, one can sit at the coral edge of the fountain for a nice chat and pre-ring display and question pop.

Splurge: Dine and/or drink at one of the hotel’s casual cafes, the Cascade Poolside Restaurant or the 19th Hole Bar & Grill.

8. Wynwood Walls (2520 NW 2 Ave., Miami) Looking for an urban, artsy place to pop the question? This spot provides the graffiti for perfect backdrops. Pick the art wall you like as there are several and they change every so often. Folks come here to take pictures and selfies in front of the cool art, and then often pick a nearby restaurant to dine or drink.

Cheap bonus: Celebrate the engagement with a slice of pie or shake from Firemen Derek’s Cafe & Bake Shop.

9. Jorge M. Perez Art Museum Miami (1103 Biscayne Blvd., Miami)  Located at the edge of the water, the PAMM’s beautiful modern architecture and scenery has become a favorite hangout for people to relax. Take advantage of a free admission day and head to the back terrace for the beautiful view. There are a few hidden landscaped spots that can provide a private place for a nice kiss and then pop The Question.

Splurge: Celebrate with a delicious meal overlooking the water at the museum’s eatery, Verde. Note: admission to the museum is not required to dine. 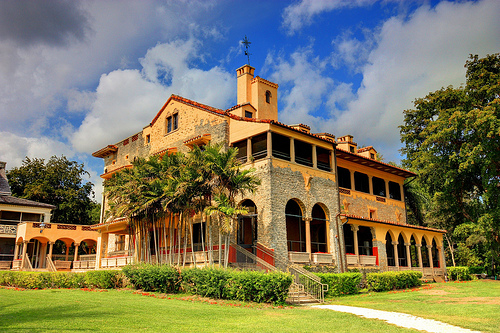 10. The Deering Estate (16701 SW 72 Ave., Miami) Take advantage of the Buy One Get One free admission and have a day at the historic Deering Estate touring the grounds, perhaps taking a canoe ride, butterfly hike or nature guided tour. Or just take it easy and relax. This place is often used for weddings and photo shoots.

Splurge: Celebrate at the Italian restaurant nearby, Alaine’s Osteria. 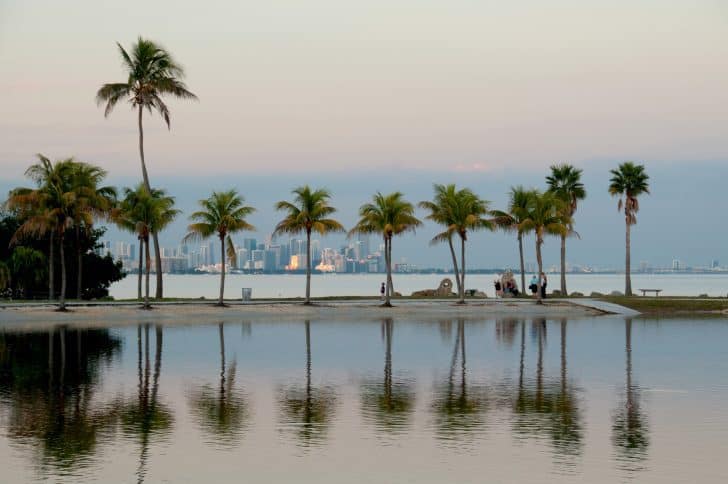 11. Matheson Hammock (9610 Old Cutler Rd., Miami) This park by the bay has just about every activity possible such as boating, kite boarding, fishing and it has an atoll pool beach that is good for families with small children. It also has been used by many people for outdoor photo shoots especially on the rocks next to the bay, with the atoll pool as a background, under its large trees, near mangroves, at the coral rock shelter. How about taking a kayak out with your significant other and head to the large pretty homes in nearby Coral Gables before returning to pop The Question at sunset.

Splurge: Stay for dinner at the Red Fish Grill and pick an outdoor table. 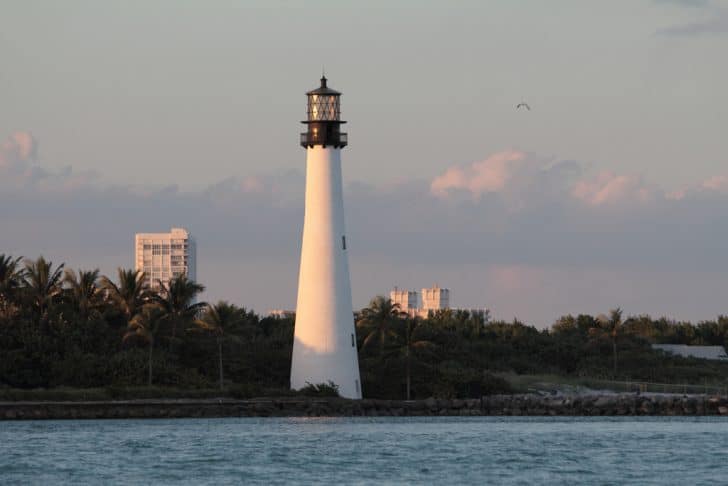 By John Spade via flickr.com

12. Bill Baggs Cape Florida State Park (1200 South Crandon Boulevard, Key Biscayne). Yet another photogenic oceanfront park that offers a series of activities and this one includes the only lighthouse in the group. Take a guided tour of the lighthouse and/or go for a hike, swim, bicycle ride, canoe trip or picnic before you pop The Question. Many engaged or wedding couples take professional photos of themselves with the lighthouse in the background and the natural vegetation in the foreground.

Splurge: Celebrate at the Boaters Grill restaurant in the park.