With its large population of Cuban exiles, Miami has among the best Cuban food in the world. So, when you’re in Miami, do as the locals do and don’t spend a fortune on delicious Cuban food.

That means you’ll have to venture out away from some of the tourist areas of Miami Beach and Downtown Miami and go west to Little Havana, Westchester, Kendall, Hialeah, Doral and other areas where most locals live and dine. Some restaurants have daily specials where an entrée is priced for as little as $6.

Here are just a few of the top Cuban casual restaurants  in Miami that are kind to the wallet and sure to engage the taste buds (Also see suggestions on what to order below): 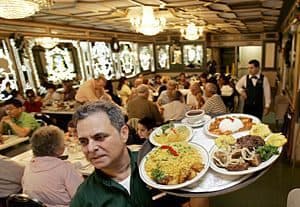 Enrique Martinez carries an order at Versailles Restaurant. Photo by Alan Diaz for the Associated Press

Versailles Restaurant (3555 SW 8th St., Miami, FL 33135. (305) 444-0240) Pronounced ver-say-ez, this is THE place and has been THE place since 1971. (Yes, it has mirrors like the Versailles Palace in France.) This is where Cubans go to eat, chat politics, and drink an afternoon cafecito at the window counter. When Fidel Castro died, this was the place where thousands of exiled Cubans gathered to celebrate the possibility of a new democracy in Cuba. Buses bring tourists here for the real deal and famous chefs like Andrew Zimmern have eaten here. It gets busy, but the restaurant is large and they serve fast. They also have a bakery next door if you just want dessert and/or a coffee. The restaurant servers can bring you anything from the bakery to your table. Click here for the menu and prices. They serve breakfast, lunch and dinner. If you’re a caffeine lover like me, try the cortadito with evaporated milk (espresso with milk). If you don’t say evaporated milk, it will come with regular milk.

La Carreta Owned by the same family who owns Versailles Restaurant, La Carreta is a country-themed Cuban restaurant. Some folks prefer its more homemade cuisine. There are more than seven locations in South Florida, but the one that gets the most attention is the one in Miami’s Westchester neighborhood. (8650 Bird Rd, Miami, FL 33155. (305) 553-8383). Like the Versailles restaurant, this place was a gathering spot for Cuban exiles when Fidel Castro died. Click here for the menu. 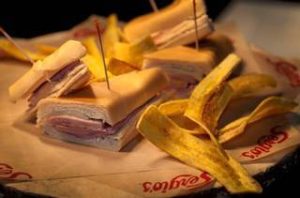 Sergio’s First opened in 1975, Sergio’s restaurants have eight locations in South Florida and a split among business partners ended up with some restaurants renaming themselves as Casavana. Like La Carreta, it provides a country theme and homemade cuisine, but they have also evolved some meals to include such foods like flatbread. Sergio’s has won statewide contests for its Cuban sandwich. They also have been successful with La Flaca diet-conscious Cuban-style foods on the menu. Click here for the menu and website info. The Sergio’s in West Kendall’s London Square (13550 SW 120th St., Miami, FL 33186 (305) 278-2024) is among the hot spots.

Islas Canarias The ham croquettes here are all the rage. Cubans have a love affair with their mother country, Spain, so it’s no wonder this restaurant is named after the Canary Islands. There are three Islas Canarias restaurants, two in Southwest Dade and the original in Little Havana. At least one has a bakery and another has a drive-through for limited menu items (but the croquettes are on there!) Click here for the menu and other website info. The family that owns these restaurants also has a higher-end restaurant that fuses Cuban food with other cuisines, like Peruvian, and that restaurant is FINKA Table and Tap in West Kendall.

Las Vegas Cuban Cuisine With 11 locations throughout South Florida, this family owned restaurant can definitely say it has achieved the American dream. The family immigrated in 1980 from Cuba during the Mariel Boatlift and opened its first restaurant in 1984 in Broward County, expanding ever since. Its true testament was furthering expansion in Miami-Dade County where Cuban food restaurants already abound. I’ve been to the Doral location (11500 NW 41st St, Miami, FL 33178. 305-599-2300) several times with journalist-friends and we have always enjoyed the food, the wine and the daily specials’ price. Click here for the website and more info.

There are too many entrées, sandwiches and foods to list so I’ve just listed three in each category. Pick whatever fancies you on the menu. Also, not mentioned below: Cuban breakfasts, which typically consists of buttered Cuban bread, hot milk with espresso (known as a cafe con leche), ham and eggs the-way-you-like-them are among the cheapest, good eats around. 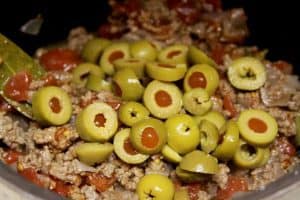 More tips on eating for less in Miami:

7 ways to save on dining out in Miami, Broward and Palm Beach