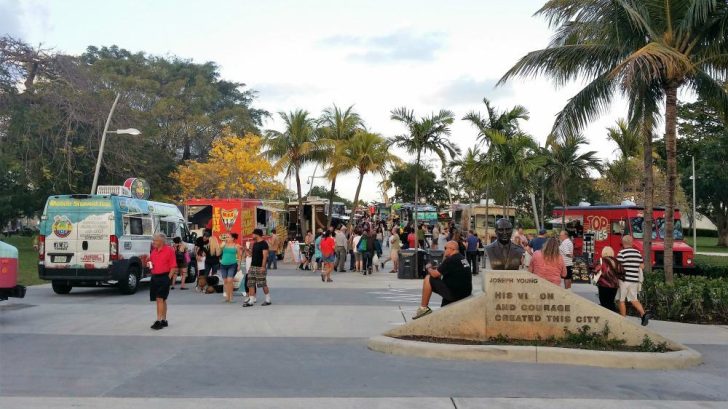 Over the years, Downtown Hollywood has been known as a quiet and accessible locale to enjoy South Florida’s beaches without worrying about crazy parking and expensive eateries.

Now, Hollywood has grown into a beacon for the local crafter who takes pride in his artistry. All around Downtown Hollywood, one can find different neighborhoods that show the pride the city has for its people.

Looking to explore this neighborhood and what it has to offer? Here are some staple places and things to do around Downtown Hollywood that won’t break the bank.

Come enjoy local bites from Broward and Miami-Dade food trucks at this food truck rally at the center of Downtown Hollywood at Arts Park. With more than 25 different food trucks to choose from, each with decent prices, you’re guaranteed to leave with a full stomach, and a full wallet, too!

Pro-tip: Bring a blanket or chair. Seating is sparse around this park, but there are beautiful lawns to lay out on while dining.

See a list of food trucks that will be there here.

Big slices of pizza for a small price. Mauro’s is a Downtown Hollywood staple for pizza. For only $3 a piece, come enjoy one of the largest slices of pizza available in South Florida. Toppings are a $1 extra.

Pro-tip: This spot only takes cash, but they do have an ATM at the entrance.

If you’re looking for a charismatic bistro that still holds true to Hollywood’s low-key charm, you’ll find it at Parrot Coffee. With their eclectic mix of salads, sandwiches, and pastries on their menu as well as comfortable indoor and outdoor seating, this unassuming deli offers itself up as a great spot to relax after a day of Downtown Hollywood exploring.

Pro-tip: Make sure to check out their wall of various wines and oils from different countries, it’s the first thing you’ll see when you walk in!

There’s more to Downtown Hollywood than the beach. In the past few years, various artisans and community members have introduced free and fun activities for everyone to enjoy that also educate the community about what the neighborhood is about, and what’s coming next.

Wynwood isn’t the only neighborhood in South Florida where you can have adventures with art. The Downtown Hollywood Mural Project is a venture crafted by the City of Hollywood to introduce contemporary art into the cultural fabric of Hollywood. If you’re looking for a fun and educational scavenger hunt, make sure to check out the map on their website of all the murals and the names of the artists who created them.

Check out the map here!

Looking for some night-time adventures? Every third Saturday of the month, the artists of Downtown Hollywood open their studios for visitors to buy their pieces, as well as see live artist demos. Missed the chance to check out some of the murals of the Downtown Hollywood Mural Project during the daytime? No problem. From 7 p.m. to 8 p.m. there are guided mural tours. Make sure to be at the Visitor’s Center on the corner of 20th Avenue and Hollywood Blvd at 7 p.m. on the dot!

More information on this event here.

South Florida is well-known for its nightlife, and Hollywood doesn’t disappoint. If you’re looking for a more low-key, mellow vibe than the neon lights and loud EDM of Miami Beach and Downtown Fort Lauderdale, Downtown Hollywood has that.

More than 200 beers. All for $4. Old Hollywood Beerhouse is one of Downtown Hollywood’s best kept secrets. Tucked away in a small corner behind a parking lot at the entrance of Downtown Hollywood, the beerhouse has only advertised by word of mouth since it opened in 2014. On the inside, walls are decked with a variety of different brews and labels for each type to make finding your favorites easier. Are you a newcomer to the beer world? That’s not a problem. The bartenders will take their time and explain the different brews to find you a solid beer to enjoy. This spot takes its name to a literal level with its retro-themed décor and old Hollywood memorabilia. In the sitting room, walls are adorned with classic records and an old-time box television set that plays old films and television shows.

Pro-tip: This beerhouse only takes cash. No cards, no tabs.

This spot exudes Hollywood’s quirky charm. The first thing that people usually notice when they walk in to PRL is the local art lining the walls, and the beer specials that are as low as $2-$3. It’s the charm of the eclectic crowd and the low-priced European craft beer selection that keeps people coming back.

Pro-tip: Mauro’s is next door! The staff of PRL don’t discriminate against a good slice, make sure to bring your pizza in with you to enjoy with a cool European brew!