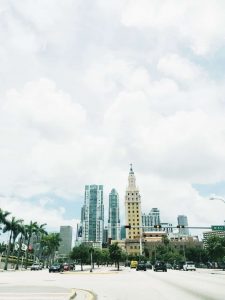 Downtown Miami’s lavish stretch of five-star restaurants, posh hotels, and extravagant nightlife make it a go-to destination for jet-setters in search of a swank expedition. Beyond the glitz of its ritzy adventures, there’s a multitude of entertaining activities to take part in that won’t burn a hole in your wallet. Need some guidance? Check out our itinerary of wallet-friendly things to do around the metropolis in the tropics.

Any day of exploring has to start off on the right foot, and what better way to start the day than with a hearty breakfast? Downtown Miami has an array of breakfast spots to choose from to get the perfect start to your day of adventure.

A day of exploring Downtown Miami should start with something that every visitor to the city should enjoy – a classic Cuban breakfast. Since their arrival in the 1960s, Miami’s Cuban population has made a heavy impression on the city’s character. If you’re looking for a straightforward dive into Cuban breakfast cuisine, Las Palmas Cafeteria will not disappoint. This unassuming café is tucked away behind the historic Olympia Theater. The menu consists of Cuban breakfast classics like dos huevos con tostadas (two eggs and toast), croquetas, and platanos. What would a Cuban breakfast be without a little caffeine? Cafecitos, café con leche, coladas, or cortaditos, Las Palmas has it all. The best part about it? You can enjoy a full breakfast for less than $5.

Not too far from Las Palmas is S&S Diner, a longstanding comfort food haven that’s been serving up American classics to the people of Miami since 1938. Located between Downtown Miami and Wynwood at the Omni, this modest café features horseshoe-style diner seating that transports its patrons back to the golden days of Miami’s upbringing. The menu hosts an array of classic American eats like scrambled eggs, french toast, and eggs benedict. The breakfast specials are offered at an attractive price: two extra large eggs with chopped ham, potatoes, toast and coffee, all for only $3.40? Yes, please.

Miami’s year-round warm weather offers many opportunities for adventure. Whether it be strolling around the city and admiring its gleaming skyscrapers, or educational tours through Miami’s museums, daytime adventures can be found a dime a dozen in downtown.

Fun fact: Miami’s nickname as “The Magic City” came from how it practically grew into a city overnight. One of the biggest cornerstones of Miami’s growth has been its culture, and there’s no surprise that the Cuban population has played a large role in shaping it. Right at the center of Downtown Miami, the Freedom Tower stands as a beacon of recognition of the city’s growth through the cultures brought into it. This architectural icon offers a first person narrative of Cuban immigrants’ exodus to Miami in the 1960s, mixed with expansive details of the forces and events that brought about their mass migration. Personal items and relics donated by refugees and their descendants offer a front seat perspective that brings visitors into the world of Cuban migrants in the 1960s. Admission is free, but donations are welcomed.

Miami will always be famous for its iconic palm trees, and Museum Park is the spot in downtown where you can find them in abundance. Coming up from the ashes of what use to be Bicentennial Park, Museum Park is the newest face of Downtown Miami’s green spaces. If you’re looking for a casual spot to relax amidst the crazy pace of Miami, this spot is best for morning walks, yoga, or for a good view of the yachts on Biscayne Bay.

Even though Downtown Miami has a reputation as a playground for the wealthy, that doesn’t mean cost-effective Miami nights are out of reach. While there are plenty of upscale dining options and mega nightclubs that can run a high bill, there are also a high number of spots in Downtown Miami to enjoy the city’s nightlife scene without breaking your budget.

Every third Thursday at the Perez Art Miami Museum, you can find a hip crowd mingling amid the arts. Live music acts and gallery exhibits take place on the grounds of the museum while guests can enjoy some tasty cuisine from the museum’s own in-house eatery, Verde. This event runs from March until September every third Thursday of the month from 6 p.m. to 9 p.m. and is free with museum admission.

Bayside Marketplace has been a Downtown Miami staple since it opened in the late 1980s. Although this space primarily serves the purpose of an upscale shopping mall, its eclectic character comes alive after dark, with several dance clubs and bars opening up shop. A quick walk past the flagpoles at the front filled with flags from all nations will bring you to the heart of Downtown Miami’s culture, with international cuisine, upscale shops and enticing music resting right on the edge of Biscayne Bay. Make sure to not miss the performers walking around with snakes around their necks and the five dollar piña coladas.

Getting around Downtown Miami:

Miami is definitely known as a traffic capital, and there is no doubt that downtown is the center of it all. If your day in the city is spent traveling around by car, Parkopedia has a map of parking spots in the downtown area rated from cheapest to most expensive that you can access here. If you’re traveling around without a car, take a look at Miami’s own MetroMover transit system as an option – you can find more info about stops and locations here.